Async operations are the core of today's web development. Almost any interesting interaction in a modern web app involves an async operation. Mouse click? Async. Loading data from the backend? Async. Waiting for something to happen before rendering some piece of UI? Also async. But there are not many powerful built-in tools for implementing working with them. Let's recall some of the native ones:

Yeah, you may wonder - what about async/await? Well, it turns out, those are just wrappers for Promises, essentially syntactic sugar.

Now let's find out whether tools listed above can solve these challenges seamlessly.

a) Starting one after another

Well, you can do that with Promise.then.then.then, but that is useful only for very straightforward logic. Also, if we want to perform some complex calculations on the result of one async operation before starting the next one, the callbacks for the "then" functions will become bloated and less readable very fast.

We can improve the situation using async/await - but what if we want to repeat failed network requests?

We cannot do that with async/await easily.

b) Combining the results of a few async operations in different ways We have Promise.race and Promise.all. Not long ago we got Promise.allSettled (check canIuse before using it) But again - that's it. No repeat on success or failure (if we want it).

c) Do displayed data recalculations on each periodical async data update Ok. SetTimeout is good here, but it does not provide any complicated failure logic (repeat on failure). It is possible to implement it - but with some code overhead.

d) Cancel async operations in case it is not needed anymore You can cancel setTimeout/setInterval - but you cannot cancel fetch (well, you can with AbortController, but check browser support first (IE11))

Do we have a solution? YES!

Examples of such events are:

The main entity (which wraps our data) from that library is the Observable .

Short answer: Observable is an object that represents a stream of data, to which we can subscribe to receive events/error notifications, and which we can manipulate using special functions called operators.

Long answer: we need to dive a bit deeper.

To understand Observables better let's use some metaphors:

a) Array of future values, which are spreaded over time - this may sound complicated, but if we break it down, it is really simple:

Let's take a usual array - its values are there instantly:

We can transform these values as well:

This is very similar to Observables - the only difference being that for an Observable the values are in place now and some of the values will be received later.

It is important to understand that most values will arrive and be handled later (at the moment of arrival).

b) Push-based value fetching - what does this mean? In general, we mostly use pull based value fetching in programming. A great example of pull based value fetching are functions: they are there, but we, the consumer of their value, determine when we will call the function to receive and handle the data. On the other hand, for example, a click MouseEvent listener is a push based system - we can never know when the event will be pushed to us - the producer determines when we receive values - but we will handle those values as soon as they arrive.

If we talk about arrays - we get any value when we want it.

But in the case of Observables (where values are delivered in the future), the receiver (which is called subscriber or observer- more about it in the next chapter) cannot control when the producer will emit values.

This approach is called push-based.

So, in the end, an Observable is an object representing a stream of values spread over time, delivered via a push based system, which can be subscribed to in order to receive and handle those values, and transformed using special functions called operators.

They have some similarities that will help us understand Observables.

The main similarity between them is that both of them represent a result of an async operation and how it is being handled. Both Promises and Observables operate with data that isn't available right now but will arrive in the future. So what's the main difference then?

The thing is, Promises are only one particular case of async operation - a singular operation with a final and conclusive result. What does that mean? Let's take a look at a standard HTTP request - how is it invoked and resolved? Well, we call a URL using one of the HTTP methods, and get a Promise that will invoke the callback to the "then" method when data arrives (this is called "resolving a Promise"), or, if there has been any kind of error during the request, call the callback provided to the "catch" method (this is called "rejecting a Promise"). Okay, so this is an operation that gets (or fails to) some data, handles it and just goes away. We cannot do anything with the Promise after it is resolved/rejected - we have to make another HTTP call, create a new Promise and handle it again in the same way.

Now, let's take a look at some click events on a button. We start listening to the click events, but there is no guarantee that the callback will be invoked any time soon, right? Now, 5 minutes later the user finally clicks the button, and our callback works and handles the event, but it is not "resolved". The user can continue clicking on the button as many times as they want, and we would still have to handle that click. And after the user finally goes to another page, we have to stop listening to the clicks, because there is no button any more. We cannot represent a stream of events like clicks with a Promise, because a Promise works once and is destroyed afterwards. But Observable Streams of RxJS give us the ability to create streams, listen to their events, handle error cases, and also, handle the situation when the stream completes - like when the user went to another page in our example. So, in this regard, we can treat Observables as a far more powerful version of Promises, which deals with multiple events rather than one instance. 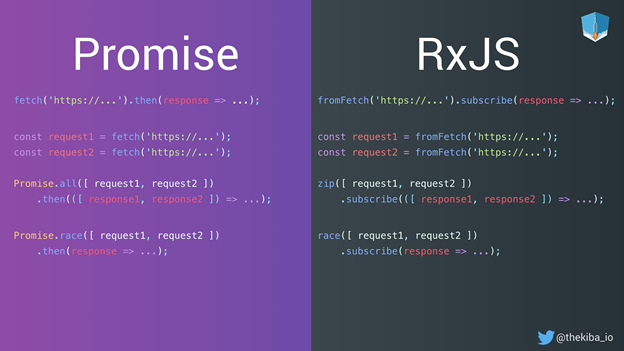 You may ask - so what is the difference? And why do we need Observables at all if they actually do same things?

The main power of RxJS is a variation of operators that can emulate any async steam behavior - for example combine streams, repeat streams on success or retry on error, etc - out of the box.

Why operators are so powerful? Because they can do many things:

a) combineLatest(observable1, observable2,…) — waits for any of observable to emit and provide array of last emitted values from all observables (result: [value_obs1, value_obs2,..]). Very good if you should update page on a new data from a few different sources.

c) forkJoin(observable1, observable2,…)— analog for Promise.all — waits till all Observables are complete and then emits an array of last values from all of the argument observables.

e) race(observable1, observable2,…) — returns an Observable that mirrors the first source Observable to emit an item.

f) merge(observable1, observable2,…) — subscribes to every argument observable and re-emits values from all of them.

g) switchMap — if previous Observable is not completed — cancel it and subscribe to new one.

I) concat(observable1, observable2,…) — start next Observable sequence only after previous one is done (emits values one by one after each specific Observable completion)

We will review some of these combinations and their use-cases in a later chapter. And dig deeper in advanced RxJS course.

but if you application is doing something more then 'Hello world' — please pay attention to the differences.

Take a look at the example below:

When I call the saveChanges method — the first example with Promise-wrapped request will work as expected. But in seconds Observable-wrapped example nothing will happen because Observables are lazily-evaluated while Promises are eagerly-evaluated.

This means that Promises doesn't care whether they have any consumers that wait for their result or not, they will emit the value regardless. But Observables (to be precise — cold Observables) will emit only if we subscribe to them. In the case above you should subscribe to the Observable returned by saveChanges function.

To keep an eye on it — use rxjs-no-ignored-observable rule from rxjs-tslint-rules by Nicholas Jamieson.

#2 Promises cannot be canceled while Observables can be unsubscribed#

Again, start with an example when we do search on a backend on input text change

There is a drawback here — you cannot reject results of the previous request if the user continues typing (debounce make this problem a bit less but doesn't eliminate it). And yet another issue — race conditions are possible (when a later request result will come back faster then an earlier one — so we get an incorrect response displayed).

Observables can avoid this concern quite elegantly with switchMap operator

We will talk about switchMap and other higher-order-observable operators in the advanced RxJS course.

#3 Easy to prevent race conditions with Observables and hard - with Promises.#

Say we periodically make a network request for updated data. But in some situations later request results will come back faster than the earlier ones — so we get incorrect (earlier requested) responses displayed as latest.

We expect here that first response will be rendered first and then second one. But in reality, because of network latency, it may be not like that. The second request response can come earlier than the first(old) response data. So the user gets non-appropriate data displayed. This situation is called race-conditions.

To prevent this with Observable-wrapped requests we can use concatMap operator (reviewed in advanced course).

In that case next request will be done only after the previous one is handled.

I hope now you've got some vision of what Observables can do. Now lets review where they are used in Angular.

Angular and RxJS are like a bee and honey. There a lots of places where Angular entities API provides an Observable.

You will dig deeper in a later article.

Hope after reading this article you want to learn more - so lets move on!